The Antichrist and the Whore of Babylon and the Babylonian Talmud

There is a growing body of literature — hotly disputed by those “who say they are Jews, and are not,” that recognize modern Jewry as peoples who have converted to the Talmud, not the bloodline of Jacob/Israel. 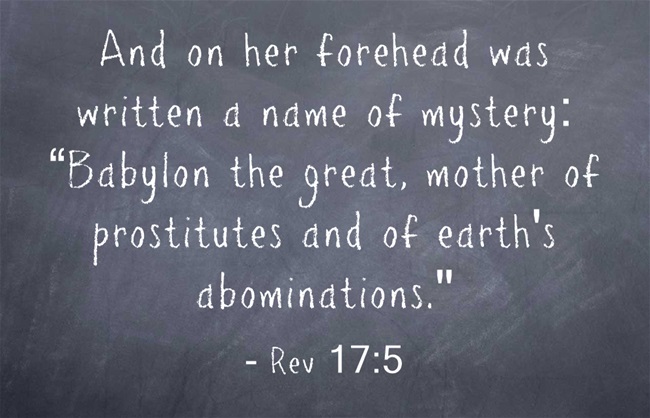 These two Jewish scholars unintentionally agree with Jesus’ declaration that men lie (or are deceived) about being descendants of Jacob/Israel.  Converts to the Talmud are, as Jesus said, of the synagogue of Satan, and twice the sons of hell as the original Pharisees (teachers of the traditions, which become the Talmud, the heart of Judaism).  And there is a huge tide in the evangelical church to accept as doctrine the precepts of men (which is what the Talmud is — the doctrines of men) over the words of Jesus Christ.  At the end of this essay, you will see those Words.

The evangelical Church errs in deferring to those who are not Jews at all. John warns Christians not to view Talmud followers as their spiritual kindred: “the one who gives him a greeting participates in his evil deeds.” — 2 John 11. Those who reject Jesus as the Christ meet the definition of the Antichrist. Judaism is antichrist. A Judeo-Christian identity, platform, or agreement is antichrist.

This is a great delusion. The Words of Jesus Christ and St. John’s Epistle easily clear this up if only evangelical Christians would not be ashamed of the word of Jesus.

The origin of the enmity (a hatred unto death) between the children of Satan and Jesus Christ (and by extension, His followers) is as old as the Fall:

The Lord said to the Serpent (Satan):

Genesis 3:15 is the foundation of the hatred between Jesus Christ as the Seed of the Serpent (which is another way of say the offspring of vipers), theTalmud followers.

In the Word of Jesus, the Messiah, the Son of God:

Jesus Christ warns His Church to flee the falsehood of a Judeo-Christian conceit in Revelation 18.

This exactly mimics what John said in 2 John 1:11 — those of such fellowship share in the evil deeds.

I heard another voice from heaven, saying, “Come out of her, my people, so that you will not participate in her sins and receive any of her plagues; for her sins have piled up as high as heaven, and God has remembered her offenses. Pay her back even as she has paid, and give back to her double according to her deeds; in the cup which she has mixed, mix twice as much for her. To the extent that she glorified herself and lived luxuriously, to the same extent give her torment and mourning; for she says in her heart, ‘I sit as a queen and I am not a widow, and will never see mourning.’ For this reason in one day her plagues will come, plague and mourning and famine, and she will be burned up with fire; for the Lord God who judges her is strong.